Home > Tourism > Not To Be Missed Nigerian Festivals
24JunJune 25, 2019
10
Posted by EditorTourism

As a country of such diverse cultures, Nigeria has a wealth of exciting and colorful festivals year-round. Not only are there festivals whose traditions reach back hundreds of years into Nigeria’s rich history, but there are massive carnivals held at the end of each year celebrating Nigeria festive spirit. Festival season is an exciting time to visit Nigeria, and since there are festivals held in every season, you’re free to take your pick and enjoy Nigeria’s exciting culture. Here are four of Nigeria’s most popular and well-known annual festivals. 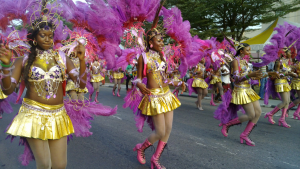 The so-called “Africa’s Biggest Street Party,” the Calabar Carnival is exactly that – a gigantic festive street Carnival held every December.  The Carnival, held annually on the 26th and 27th, is the capstone of the Calabar Festival, which itself covers the entire month of December.

During the Calabar Carnival, over 50,000 participants arrive decorated in vibrant costumes and perform down the 12km street route in Calabar.  They are cheered on and celebrated by the nearly 2 million spectators and the estimated 50 million TV viewers each year.

The festival includes the Calabar King and Queen festival, which is a beauty pageant that celebrates the beauty of local Nigerian women.

The festival promoters are angling for this festival to become a pan-African and fully international event, and to that end, have been successful in getting major international musicians booked for past events, including Akon, Nelly, and Young Jeezy

Carniriv is similar in style to the Calabar Carnival, and is held in the city of Port Harcourt in River’s State.  It is a weeklong festival held annually right before Christmas, and in 2014 was held from December 12 – 20.  It is the largest carnival held in Rivers State, and is by far the largest tourism export for Rivers State each year.

As with many other carnivals in Nigeria, you can expect colorful costumes, dancing, great food and music, and a vibrant atmosphere.  Over 500,000 people were estimated to have attended Carniriv this past year, with everyone enjoying the 14km street parade in Port Harcourt.

In 2014, keeping in line with Calabar Carnival, Carniriv kicked off the festivities with the first ever Miss Carniriv Pageant, which again celebrated the beauty and grace of the women of Nigeria. 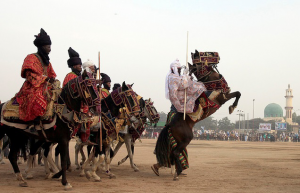 The Durbar Festival is one of Nigeria’s most famous and well-known traditional festivals, stretching back more than 200 years when the cities of Kano, Katsina, Bida, and others were ruled by an Emirate.  These festivals are held every year at the end of Ramadan – Eid el-Fitr, and although they were once practical military parades to show allegiance to the Emir, are now considered popular tourist attractions.

The focus of the festival is the display of horsemanship and military prowess.  In the 19th century, each noble house in Kano was required to organize a regiment with the purpose of defending and protecting the Emir.  Once a year, they were required to prepare themselves in full ceremonial attire and present themselves for inspection at the Emir’s Palace.

Today, this festival is less functional and more ceremonial, but the pageantry of the Durbar Festival is not lost.  Among the hundreds of colorfully robed horseman are armies of musicians, trumpets, flutes, and acrobats.  The Emir is formally heralded by a salute of period flintlock muskets, and the horsemen ride their horses at full gallop directly towards the Emir in order to demonstrate their superior horse-riding abilities. 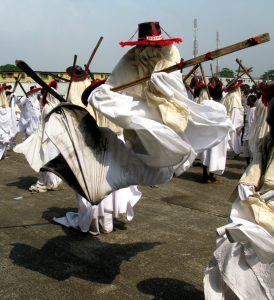 The Eyo Festival is held in Lagos Island, and unlike other festivals, does not have a fixed date each year.  This is because this festival is traditionally a spiritual festival that honors the passing of a departed Lagos chief or high ranking official and celebrates the coming of a new one.

Although the roots of this festival date to about 1750, the first Eyo Festival was held on Lagos Island in 1854.  The celebrants are called masquerades, and their costumes consist of three parts – the fully covering white robe with a mesh opening for the eyes, a wide-brimmed and colored hat, and a staff called an opambata.

There are 5 possible colored hats, each depicting one of five deities.  The most senior of the five are those who wear the black hats (orisa adimu), and the junior masquerades wear red (okan laba ekun), yellow (eyo orisa oniko), green (eyo orisa olagede), and purple (agere eyo orisa).

The festival is a street parade filled with these white-robed masquerades dancing, chanting, and tapping each other with their opambata staves, which ward away evil spirits.

Only Africans Can Develop AfricaTop 10 Innovations By 2050 – Quantum Infographics

Eyo is an innovative professional with extensive credit, sales, eBusiness, ICT and project management experience in financial services and a strong interest in the developing Digital Platforms, Digital Transformation and Big Data.